Why The LEFT Hates Trump

a book by Tom Peterson

A Humorous Look at Modern Day American Politics—but Who's Laughing?

The Amazon blurb says that it's A humorous look at modern day American politics. The LEFT is way out there on the fringes and will do anything or say anything to get their candidate elected and control the masses. Some call them Liberal Progressives (aka Fascist Socialists) and they know better than you how to run your life and know nothing of our Constitutional Republic. 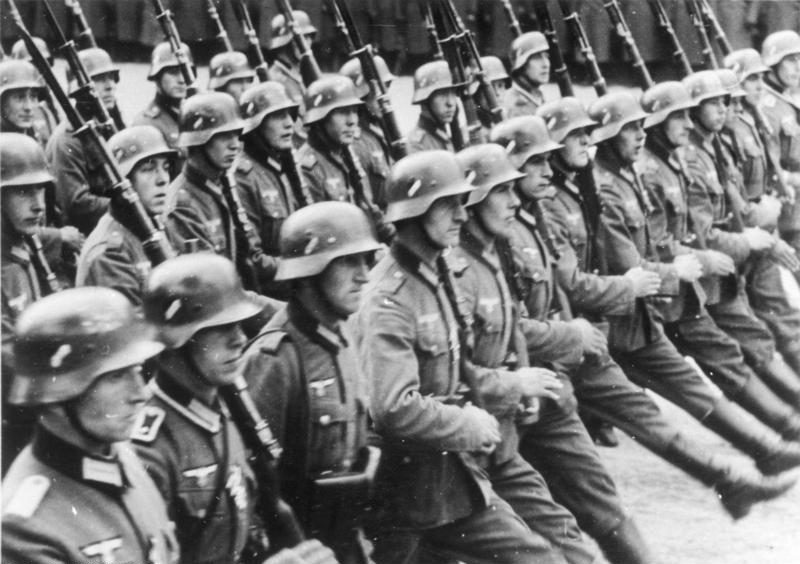 Fascist Socialists want to run your life, but if you resist, fascistic stormtroopers will be goosestepping their way to your door

"I think the reason behind the Trump hatred is rather simple. In a 'slowly, slowly' manner, the Left had got all of America to acquiesce to their ideas. Even the GOP offered just a watered down version of Leftism. Any shadow of patriotism, for instance was likely to be branded as 'racism'. . . . Trump instantly overturned those hard-won 'gains'. It was once again OK to celebrate America and remove the regulatory shackles that the Left had imposed on American business. Trump revived real, traditional conservatism and insisted on a fair shake for America in trade, defense and much else. No wonder the Left were outraged! He had instantly undone decades of their work." (Source: Why the Left Hates Trump, John Ray, Paradigms and Demographics)

This is an instructive hatred, because what the left hates about Donald Trump is precisely what it hates about America—he is a typical American—except exaggerated obscenely, warts and all

Liberals don't hate Trump because of any policy he has espoused, any grotesque pussy-grabbing boast he has made, or any violent threat he has leveled, all of which gets him disgust—but not hate; hate is reserved for Trump being a metaphor for America's shortcomings

"Over at The Wall Street Journal, Yale computer scientist David Gelernter inadvertently illustrates the bad that happens when politics oozes over everything like some spoiled sauce that fouls your barbecue and everything else on your plate. He does this during an attempt to mind-read the libs and divine 'the real reason they hate Trump.' Liberals don't hate Trump because of any policy he has espoused, any grotesque pussy-grabbing boast he has made, or any violent threat he has leveled, says Gelernter [who asserts that 'This is an instructive hatred, because what the left hates about Donald Trump is precisely what it hates about America.']. No, he declares, the liberals hate the billionaire real estate developer because: 'he is a typical American—except exaggerated, because he has no constraints to cramp his style except the ones he himself invents.' . . . The bigger, more important response to both Trump and his fanboys and haters is to refuse to make everything about politics. Because that way madness lies." (Source: I Don't Hate Trump Because He Is 'the Average American in Exaggerated Form.' I Dislike Him Because of His Policies and Temperament., Nick Gillespie, Reason)

David Gelernter illustrates the bad that happens when politics oozes over everything like some spoiled sauce that fouls your barbecue
Many of America’s Colleges Are Advocating a System of Collectivism, Government Intervention, and Redistribution

"Many of America’s colleges and universities are increasingly teaching that a system of collectivism, government intervention, and redistribution is the path forward for our country. The Left continues to attack President Trump's economic agenda of tax cuts, deregulation, and dismantlement of government bureaucracy. . . . Yet, as Ronald Reagan once told a YAF audience, 'Profit, property, and freedom are inseparable, you can’t have any one of them without the other two.' We know you are hungry for a different perspective. You want to hear a point of view that advances the power of the individual to build thriving businesses, less burdensome regulation, freedom from controlling government bureaucrats, and ultimately, a brighter future for you and their peers. Young America’s Foundation is hosting this seminar to provide just this opportunity." (Source: Why the Left Hates Trump's Economy, Young America's Foundation)

The intensity of the hatred for a newly elected president faced by Donald Trump is equaled only by the reaction of the Confederacy to the election of Abraham Lincoln, which ended up in civil war

"The intensity of the hatred for a newly elected president faced by Donald Trump is equaled only by the reaction of the Confederacy to the election of Abraham Lincoln. That ended up in civil war, a precedent that one hopes will not be equaled. But there has been a remarkable fury at people who do not shun Trump: boycotts of a company whose shareholder contributed to a PAC supporting Trump, attempts to pressure the president of a historically black college to prevent its marching band from performing at the inaugural, and hateful rhetoric at Hollywood awards ceremonies. With much more to come. A useful perspective is to regard this as a religious conflict. Cults behave exactly the way the left is behaving when a member leaves the fold." (Source: Why the left hates Trump so intensely, Thomas Lifson, American Thinker)

Trump is a fighter who likes to win, so when liberals bring a knife, he brings a gun

A useful perspective is to regard this as a religious conflict: the alt-right's Ayatollah Trumpowski has no liberal counterpart
Another Major Reason Lefties Hate Him Is Because He Fights Back, Skillfully, and In an Effective Manner

"Yet it’s more than just the stages of grief that Leftists are exhibiting. Another major reason they hate him is because he fights back. Not only that, he is skilled at media jiu-jitsu, and fights back in an effective manner. And when he does so, all they can do is call him even more names, and that his tweets are 'un-presidential.' What did they expect? Trump is a New Yorker, who didn’t build an empire by wearing a pink pussy hat to every real estate closing. Trump has always been a pugilist. He’s always been crass. Why would anyone expect him to suddenly change? This is the behavior that got him into the White House, and will keep him there, for better or for worse." (Source: Why They Hate Trump So Much, Lawrence Meyers, Town Hall)

Journalists say Trump's tweets are 'un-presidential' while Trump calls them something more frustrating to liberals: effective

"The hypocrisy of the Fourth Estate is astounding. Commentators inebriated with their mission to take down Trump had zero interest in aggressive 'gotcha' journalism when Obama was in office. They covered for the Obama administration’s culture of deceit from beginning to end. They protected their smooth-talking president when his White House manufactured lies about what really happened in Benghazi and other scandals. They covered for him when Obama repeatedly promised Americans that everyone could keep their doctors and healthcare plans and looked the other way when Obama said there was 'not even a smidgeon' of corruption — while an IRS investigation was still in process. . . . In 2014, a Fox News poll found that 81 percent of Americans believed that Obama lied at least 'now and then' on what they interpreted as 'important matters.' That is stunning. Regardless, to this day they continue to worship him because he moved them closer to their ideological goalpost. Obama was a smooth-talking liar who, like them, would love nothing more than to hand over America’s sovereignty to the United Nations. His view that the U.S. Constitution was a 'living document' soothed the souls of those who wish to ban free speech and gun rights, and eventually do away with the U.S. Constitution because they view it as an irrelevant racist rag." (Source: SUSAN STAMPER BROWN: Why the Left hates Trump: OPINION: If the Left hates him, the president is doing something right, Susan Stamper Brown, Albany Herald)

Leftists want to eventually do away with the U.S. Constitution because they view it as an irrelevant racist rag

Brown is right: if the Left gets its way, the free speech promised by the U.S. Constitution will soon be nothing but a fond memory. Citizens rejecting the liberal party line will end up behind bars. It boggles the mind to observe things in today's liberals that manifest an extreme failure of American education. Civics education is either absent from 7th-12th grade education core curriculum, or the teachers are abysmal. Liberals have abandoned democratic principles en masse and replaced them with fascist tactics without blinking an eye. Worse, the teachers and administrators are supporting this outrage wholeheartedly—again without blinking. Why is it so easy to abandon democratic principles in favor of tyranny? Because to the degree subjects like civics and U.S. history were taught at all, they were taught in the form of boring and annoying facts to memorize long enough to regurgitate them in a test, after which the student purges his mind of these things and goes back to texting, tweeting, and Facebooking.

Victim-based identity groups are so desperate for meaning and purpose that they destroy monuments and statues that remind them that the white male Founders weren't as PC as they are, so that makes them evil. See Erasing America: Losing Our Future by Destroying Our Past

The chickens have come home to roost. We are much closer to tyranny than anyone realizes, because we are now cursed with a whole generation of liberal fascists who see nothing wrong with applying fascist tactics on people

The chickens have come home to roost. We are much closer to tyranny than anyone realizes, because we are now cursed with a whole generation of liberal fascists who see nothing wrong with applying fascist tactics on people and not just denying them their Constitutionally guaranteed right to free speech but also character assassination, demonization, threatening, blackmailing, doxing, trolling, getting fired, getting blackballed, getting set up, getting slandered, getting harrassment, and other dehumanizing tactics even including violence.

Obama was a smooth-talking liar

If only these two crooks could have been impeached! Where are they now? At the beach!

Obama wants you to believe I AM NOT A CROOK, but you know better!

"The populist right rejects individualism in favor of a raw cult of personality that demands unthinking loyalty to the Great Leader. The progressive left rejects debate in favor of repressing those who would dare offer opposing views. What's a decent person to do but spurn both political tribes and work to undermine the governments they dominate?" (Source: Fight the Populist Right, the Progressive Left, and the Governments They Control, J.D. Tuccille, Reason)

Trump wants you to respect his authoritah!

Why The LEFT Hates Trump is just a long list of reasons why the Left hates Trump, but it seemed drawn out and less thoughtful than if some of the more important reasons were expounded with greater detail, insight and clarity. The book can make you chuckle, unless you are a Leftie in which case you will probably get so enraged you will catch fire and turn to ashes, after which you'll probably come back as a spirit and shriek at your grave for polluting the environment with your ashes (the ones that blew away before the coroner could scoop them into a bucket to later dump in a coffin) and for contributing to global warning with your fire, after which you'll probably go haunt the Strongman in the White House—you know: the Orange Oligarch.

If he happens to see your ghost/spirit, after the shock he will probably bribe you and send you to haunt a competing hotel like the Hilton